Ben Damph Estate has alot to offer those who enjoy the outdoors, with 14,500 acres of land, it contains an awe-inspiring mixture of magnificent mountains and glens, sea lochs and inland lochs, with views constantly changing colour and mood.

Ben Damph means hill of the stag in Gaelic and it is historically a ‘deer forest’, meaning it was managed for red deer stalking. In the modern age it has become as much about the forest as the deer. The estate has planted native trees such as birch, oak and Scots pine and fenced off large areas to encourage regeneration. In the long run, the deer exclosures should generate enough trees to connect surrounding fragments of the ancient Caledonian forest. We manage the deer as part of this programme of bringing back the forest, whilst also harvesting sustainable, healthy meat. On the wider estate we keep semi-wild sheep as a source of ethical meat. We also encourage people with the right skills to help us manage wildlife such as rabbits and greylag geese, that are controlled as part of food production.

A word about pricing

We charge an ‘outing fee’ for the day on the hill as we believe that the best part of the experience is the stalk itself. We charge a little extra for shot fired and would expect in most circumstances for a suitable animal to be found for culling. The stalkers fee should be around £175 but this can vary depending on the stalker and the amount of time you are out. We encourage anyone who kills an animal to take them home to eat – and to help bring the animal off the hill!

We keep a flock of semi-feral Soay sheep on the estate as source of ethical meat. Unlike domestic sheep they are impossible to round up! So, we rely on culling them in the wild to manage the population. This can mean shooting the animals on the hill or in the parkland around the estate. There is no fee for shot fired as you are pretty much guaranteed to get a sheep. The meat is delicious and highly sought after by professional chefs.

Wild meat for the pot

Rabbits around the village are controlled to stop them over-running the local vegetable beds. Greylag geese are controlled where they are eating grass intended for domestic animals. Again, we would encourage anyone who wants to shoot these animals to take them home for the pot. 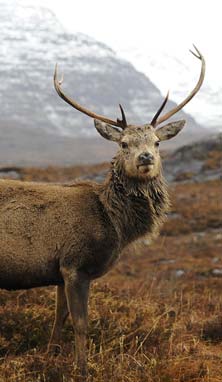