The whole of the Beinn Damh Estate lies in the parish of Applecross (a'chomraich in gaelic) and thus in former times was part of the lands of the ancient Abbey of Applecross, founded by St Malruba (Maol Rubha) in 673 A.D. Some place names on the estate reflect the fact that they were on the edge of this ecclesiastical property. For many years, the titular Abbot of Applecrcross was drawn from the clan Anrias, the ancient Rosses. Following their fall from grace in the fifteenth century the parish fell into the hands of the nearly related clan Coinnich, the MacKenzies. Indeed the MacKenzies of Applecross held most of the parish until the nineteenth century. Perhaps not surprisingly the principal surname in the area is MacKenzie, though there are many MacDonalds along the North shore of Loch Torridon, approaching Gairloch Parish.

Annat is the surviving village of the estate, and former home of the famous Annat skull. The skull was from of an unfortunate woman called Grant who committed suicide. In the eighteenth century, a suicide was not permitted burial in sanctified ground, so Grant was buried outside, close to the wall of the old burial ground. Her skull came up to the surface many times and eventually became famous throughout the Celtic world as the instrument in a cure for epilepsy. It was necessary to drink water out of the skull from a particular spring and at the same time perform a prescribed walk accompanied by certain incantations. Though seeming somewhat strange today, apparently it never failed to work.

As well as building the Beinn Damh House and several other fine houses on the Beinn Damh Estate the 4th Earl set about building the splendid network of stone paths, which cross and re-cross the whole estate. These paths are superbly engineered and unsurpassed in the Highlands. Path building ceased at the outbreak of war in 1914 and was never resumed.

In the early 1960s Beinn Damh House was converted into a hotel and managed by the Lovelace family, who moved into Torridon House.

Following the death of the 5th Earl the now Loch Torridon Hotel and the Beinn Damh Estate were sold to Major Braithwaite who later sold the hotel back to the Countess of Lovelace and the estate to a Dutchman, Mr Katz.

The present proprietors purchased the estate from Mr Katz in 1983. The Loch Torridon Hotel now belongs to Mr & Mrs David Gregory and family. 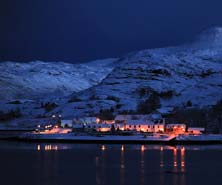 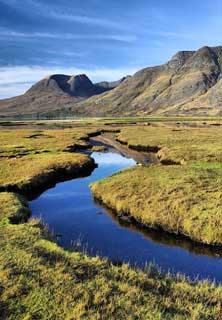